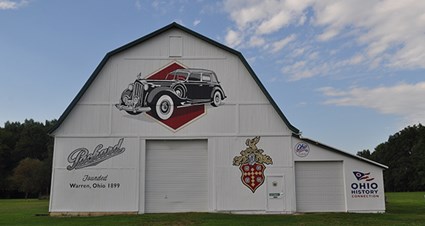 Mr. Fenstermaker also has a personal connection to Packard: he worked there for 35 years, as did his mother and many other relatives. He says that he feels lucky to have worked at Packard during its heyday and adds, “we are proud to have been chosen to have the barn painted and we would like to thank the Trumbull County Tourism Bureau, the state of Ohio, and painter Scott Hagan for working with us on the project.”

Beth Kotwis Carmichael, Executive Director of the Trumbull County Tourism Bureau, says, “We’re very excited to have the opportunity to share both our area’s story and its ties to the larger story of Ohio history through this large-format art installation.” She continues, “We’re thrilled that we were selected so early in the Ohio History Connection Project. This barn painting will prompt visitors to explore this and other sites in Trumbull County, and we encourage both visitors and residents alike to take in the legacy left by the Packard family to this area.”