The Mahoning Avenue Pioneer Cemetery is one of the few places in Warren that looks the same today as it would have two centuries ago situated on 1.4 acres of land donated by its former owner Henry Lane Jr. who arrived in Warren from Pennsylvania in the spring of 1800 with his family.

The Mahoning Avenue Pioneer Cemetery is one of the few places in Warren that looks the same today as it would have two centuries ago situated on 1.4 acres of land donated by its former owner Henry Lane Jr. who arrived in Warren from Pennsylvania in the spring of 1800 with his family.

This Pioneer Cemetery was first used in September of 1804, when Sarah “Sally” (Fitch) Adgate, the first female resident of neighboring Howland Township, passed away at age 40. The cemetery would ultimately be used for the next 94 years, with the last burial taking place in 1897.

To easily find the graves featured in this article, markers are listed in order of appearance as one walks through the cemetery, starting at the front gate. Photographs can be used for easy identification.

John Stark Edwards: A Man Who Left His Mark

John Stark Edwards was born in New Haven, Connecticut, on August 23rd, 1777, and named after his father’s friend, Gen. John Edwards, who, just a week before the boy’s birth, defeated the British at the Battle of Bennington, Vermont. Educated at Princeton College, John Stark graduated in 1796 and furthered his education at the prestigious Litchfield Law School in Litchfield, Connecticut.

At this point in the Spring of 1796, John would depart Connecticut and settle in Township Number 7, 5th Range on the Western Reserve, or what is now called Mesopotamia in Trumbull County, where he erected the first log cabin.

Upon his arrival as one of the first lawyers to settle in the Western Reserve, Edwards was an attorney at the first legal trial in Trumbull County, defending wandering trader James McMahon for killing an Indian, Capt. George at Salt Springs following a brief confrontation. Then in 1812, Edwards would become the first member of Congress to hail from the Western Reserve, appointed as a representative of the Sixth District. Unfortunately, he would never live to take his seat. In early 1813, on a journey to inspect his father’s landholdings, Edwards became ill, passing away on February 5th at age 35. He was interred here beneath a simple brownstone marker.

Mary Bosworth: Smiling as The Morning Sun She Rose 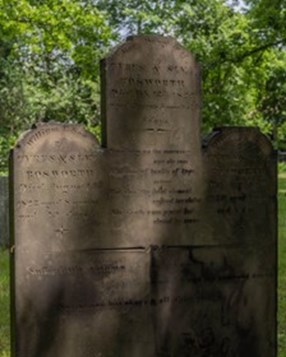 Cyrus Bosworth arrived in Warren around 1811. After purchasing land on the north side of Courthouse Square in 1817, he built the National Hotel- a predecessor to today’s Park Hotel. Then tragedy struck. Early on the morning of February 13th, 1822, Cyrus awoke and started a fire in the parlor hearth before setting about his duties. At this moment, his three-year-old daughter Mary leaped out of bed and made her way to the hearth, intending to warm herself by the fire. An errant ember flew onto her clothes and, in an instant, set the poor girl afire. Hearing his daughters’ screams, Cyrus ran into the room, but he was too late.

Sparing no details, her obituary said that by the time her father reached her, “it was not until she was so dreadfully burnt as to render all medical aid unavailing.” It went on saying, “Soon, she faded away from her injuries, as “her extremities grew cold” and “within sixteen hours” from the incident, “she was a corpse.” She was taken to the burying ground on Mahoning Avenue and buried next to her infant brother. Following the departure of the Bosworth children, a unique three-paneled sandstone marker was placed at the head of their graves, commemorating these young lives cut short.

Ezra Rawdon: Kill’d by A Kick From A Horse 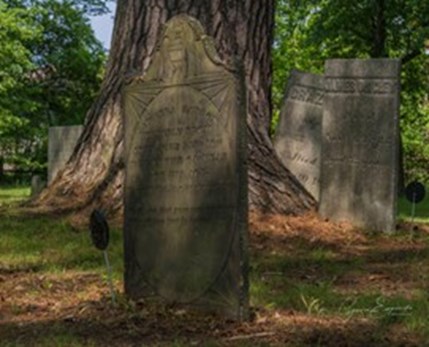 A native of Tolland, Connecticut, Ezra Rawdon was born on March 11th, 1762. At the age of 18 in 1780, he served in Capt. Samuel Chapman’s 22nd Regiment of the Connecticut Militia alongside 32 other local men. He would then marry Sarah Lathrop on November 11th, 1783, and have three children: Jeduthun, Horace, and Lois. Around 1815, Ezra, now 55 years old, relocated to Northeast Ohio.

It would be here that on September 16th, 1824, at 64 years old, his death would be “occasioned by the kick of a horse.” Buried beneath a sandstone marker graced by a willow and an urn, along with elliptical fans radiating from the top corners; the epitaph upon his grave makes a note of his untimely death caused by an equine’s punt with the phrase “he was kill’d by a kick from a horse,” along with the following quote referencing the brevity of life: “God who first gave him breath afterward oft calls him back by sudden death.” 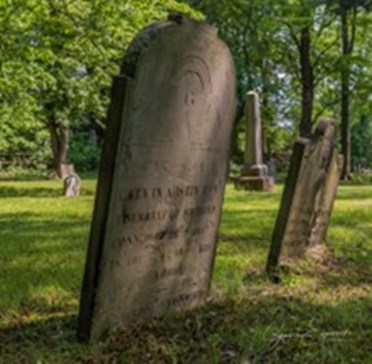 Born in Suffield, Connecticut, in 1762, Calvin Austin was from a family of pioneer settlers, and following in his family’s footsteps, in 1800, after his first wife’s death, he came to Warren. Upon the creation of Trumbull County on July 25th of that year, he was appointed as one of the first justices of the peace within the county. In addition to his role as a justice of the peace, he was elected as the associate judge of common pleas, a position he would serve until 1807.

Then two months after the War of 1812 broke out on August 22nd, 1812, Calvin, then 50 years old, enlisted in Capt. David Dull’s Company as a private for two terms. Then in October of 1819, he would ultimately pass away “instantaneously” at the age of 57 years. Austin’s remains were “borne by his Masonic brethren” to the Trumbull County Courthouse shortly after. A full service occurred according to Masonic tradition before Austin was buried here next to his son, Charles Austin. His headstone is one of the few in Old Mahoning Cemetery that bears a carver’s signature. At the bottom, in bold letters, are the words ‘C. Ferris, Engraver,” the mark of Cornelius Ferris, a former native of Addison, Vermont, carved headstones out of Newburgh, Ohio, just south of Cleveland.