A tract of land longer than it is wide along the south side of Dennison-Ashtabula Road, the East Greene Cemetery is a bucolic pioneer burial ground set at the edge of a forest glade. Guarded by a chain link fence around the perimeter and stately trees in the back, rows upon rows of weatherworn headstones stand to greet those who cross the gate’s threshold. Established somewhat later than other cemeteries we’ve examined in this series, the East Greene Cemetery came into existence in February 1832 with the death of William Cowden, the young son of Simpson Cowden who emigrated to this area from Randolph, Cattaraugus County, New York. Used throughout the 19th century well into the early decades of the 20th, the last burial here took place in 1923. The cemetery is occasionally referred to as the “Kenilworth Cemetery'' in some publications, as a mile to the north, the once thriving community of Kenilworth existed at the corners of State Route 87 and Dennison–Ashtabula Roads. Having a post office, general store, and inn, the community was a popular stop along the Cleveland to Meadville stagecoach route. In order to easily find the graves featured in this presentation, markers are listed in order of appearance as one walks through the cemetery, starting at the front gate headed left, as well as photographs for easy identification.

Established somewhat later than other Trumbull County cemeteries, most of the headstones in the East Greene Cemetery are made of marble and limestone as opposed to brownstone, though few of the latter kind of markers exist dating from early on. 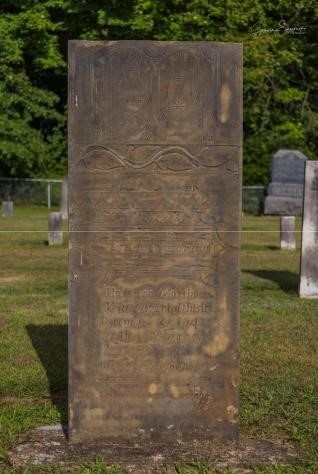 One of the first graves a person encounters upon entering the East Greene Cemetery, the chestnut colored headstone of Hannah Morehouse is a work of art. Standing roughly three and a half feet tall and carved from soft sandstone, even from a distance, it’s easy to tell the marker is richly laden with intricate carvings. Undoubtedly the work of ‘Fancy D,” the anonymous carver responsible for the headstone of Cordelia Baldwin as discussed in the Vienna Memorial Cemetery guide. While a name has never been ascribed to this carver, he is known for the fanciful, swooping D’s included on his markers––one of his identifying traits. Active from roughly 1832 through 1844 throughout Northeast Ohio and Western Pennsylvania and even earlier in the Southern Tier of New York, “Fancy” chose sandstone as his primary medium, however on occasion, worked in limestone. Opting to adorn his work with both naturalistic and geometric motifs such as oak leaves, vines, acorns, columns, diamonds, another identifying symbol of his was the six sided coffin, pand rominent on almost every stone he carved. On occasion, as with the case of Hannah Morehouse’s marker, the ever so popular willow and urn makes an appearance, although this imagery is used sparingly by him.

identified by the types of “D’s he carved, the headstone of Hannah Morehouse features typical motifs of his work such as oak leaves, columns, fans, and a coffin along with the more uncommon willow and urn––a motif he used only sparingly. 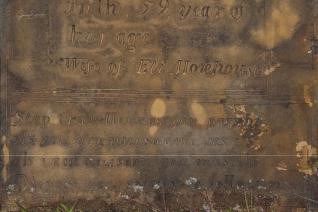 A native of Fairfield, Fairfield County, Connecticut, a village along the coast of Long Island Sound that was famously torched by British troops in 1779 three years before her birth, Hannah Morehouse, nee Knapp was born in 1782 as the second out of three children to Thomas and Martha (Fabius) Knapp. Marrying Eli Morehouse in November, 1801 at Norfolk, Litchfield County, Connecticut, the couple soon proceeded westward, along with Hannah’s parents to Onondaga County, New York, settling at Fabius. Subsequently having four children there, Eli in 1804, Martin, 1810, Wheeler David, 1815, and John George, 1820. The family arrived in Ohio no later than 1835 as implied by Wheeler’s marriage record which lists him as marrying in Ashtabula. While the children went their separate ways and parted from their parents, Hannah and Eli settled in Greene Township, whereupon December 27th, 1841, Hannah would pass away at the age of 58 years old. Buried in the South Cemetery, her opulent brownstone marker contains a warning regarding own morality: Stop travellers as you pass by/As you are now so once was I/As I am now you shall be/Prepare yourselves to follow me.” While these lines may seem grim and even inappropriate for a loved ones’ memorial, it is all but a trope in historic cemeteries, especially those dated early on and filled with English bones. Supposedly an old Greco-Roman verse, variations of the couplet were passed down through the ages to Italy, where it then traveled to the churchyards of England and Scotland. Transported across the Atlantic by early settlers of the colonies, the verse endured even more popularity in Puritan New England before expanding west of the Alleghenies with settlers towards the end of the 18th century. All but common in cemeteries by the late 19th century, Hannah’s grave is by no means the only marker to have this epitaph in Trumbull County, as markers in Hubbard, Liberty and Kinsman share variations of it also.

I/As I am now you shall be/Prepare yourselves to follow me” may strike modern readers as foreboding, perhaps even as frightening, the verse is relatively common in

historic cemeteries dating from the 18th through 19th centuries.

Strange As It Is But ‘Tis So: The Mysterious Epitaph of Ruth Sirrine 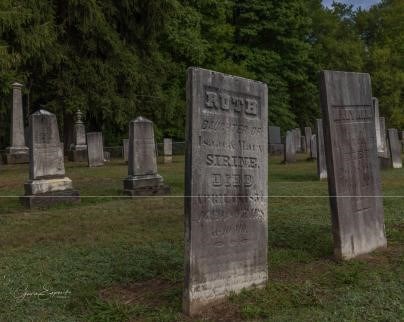 Only 18 years old when she died in 1851, Ruth Sirrine was one of the many daughters of Issac and Mary “Polly” (Craig) Sirrine. Born in Ohio, her parents had come to the area around 1824 from Lima, Livingston County, New York, first settling in Cherry Valley, Ashtabula County before coming to Greene Township a year before her death. While it is not known what caused her to die on April 19th, 1851, the epitaph upon her plain, marble headstone seems to point to a sudden event, stating that as “strange as it is, but it is so/here are three sisters in a row, we were cut down in all of our prime/the daughters of I. and M. Sirrine.” There’s an issue with this though––there are no other names besides Ruth’s on the marker or in the row she is in, no other headstones surround her grave. The nearest headstone, that of Mary Ann Culver on the right, is not a sister of hers, and to the left, no headstone stands.

With the verses “strange as it is but ‘tis so, here are three sisters all in a row, we were cut down in our prime, the daughters of I. and M Sirrine. We have paid the debt you plainly see, left to be paid, my friends, by thee” carved upon the stone, Ruth Sirrine’s headstone brings more questions than answers, as three sisters do not rest beside her. 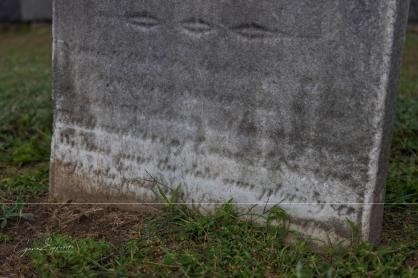 While it might seem possible that the mystery sisters could be buried in unmarked graves, a 1928 survey of the cemetery by Grace Winnagle seems to discount the possibility of this, as in the row Ruth is in, she is documented as the only member of the family to be buried there. More recently, FindAGrave says the same thing. Is it possible these recordings could be inaccurate though? The third out of seven children, four girls and two boys, it is not recorded where or when her siblings died, it’s possible the markers for them had been simply discarded by time both documentations took place. Is there a chance that Ruth’s epitaph is not a mystery after all, or is it really strange as it is but “tis so?”

Badly worn, the mysterious epitaph of Ruth Sirrine’s headstone would’ve been nearly lost to history if it had not been included in the 1965 book “The Greene Story” by local historian Mary Case Hoskins.

It’s often a common misconception that in old cemeteries, most of those buried in them died young. While lives were often cut short by disease or accidents, if a person managed to avoid these while growing up, chances were pretty good that they’d live a long, fruitful life. One such man who did so was Wyman Wakefield, whose life spanned 90 years––and 14 presidents, 9 of whom he voted for. The brother of John Wakefield, one of Greene’s original six settlers, Wyman Wakefield was born January 18th, 1770 in Brookfield, Orange County, Vermont, the son of William and Dorcas (Hayward) Wakefield. An active participant in national elections, at the age of 20 years old in 1790, Wakefield first cast his ballot for George Washington in the nation’s first presidential election. Over the following 70 years, he’d subsequently vote in every presidential election except the years of 1840 and 1848, with his votes helping to elect John Adams, Thomas Jefferson, James Madison, James Monroe, Andrew Jackson, James Knox Polk, Martin Van Buren, and Franklin Pierce––the last four presidents done so while living in Ohio.

Usually, it is thought that in historic cemeteries, those buried inside them died young as a result of disease or accidents, however as the headstone of Wyman Wakefield, who died at 90 years old in 1859 shows, this is often a misconception. 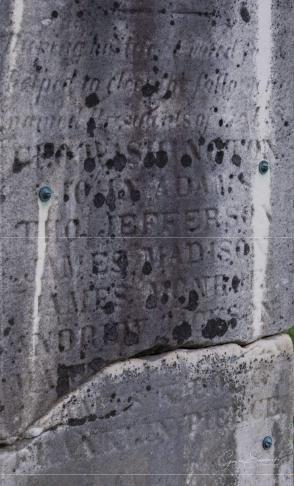 While little is personally known about Wyman’s life aside from his voting record, in 1802 his brother Thomas departed New England for Upper Canada, or what we now know as southern Quebec. When the War of 1812 erupted, New English transplants living in Upper Canada––then controlled by the British, were required to pledge their allegiance to the Crown. Because of this, many emigrants fled back to the United States, including Thomas and his new bride. Having got word of good land in Northeast Ohio, he, along with six other men soon traveled to what is now Greene Township in 1817, purchasing land there from the Connecticut Land Company. It would be assumed that it was around this time that Wyman, then 47 years old, joined his brother in the newly settled township. Unlike his married brother Thomas, Wyman was a lifelong bachelor who simply put all his life’s energy into working the land. Doing so until 80 years old, the 1850 census listed him as being a “superannuated” farmer residing with his nephew, Edwin. It is not known what called Wyman away, however on August 16th, 1859 after 90 years on this earth, he passed away. Inscribed upon his headstone is the following epitaph, a testimony of his longevity and enthusiasm for the Republic: “During his life he voted for and helped to elect the following presidents: George Washington, John Adams, Thomas Jefferson, James Monroe, James Madison, Andrew Jackson, Martin van Buren, James K. Polk, Franklin Pierce.”

For all works cited used to build this article please click here.

At the corner of Dennison Ashtabula Rd and Gardner Barclay Rd.
North Bloomfield, OH 44450
Get Directions