The Vienna Memorial Cemetery is tucked behind the quaint New England-style village green of Vienna Center and faithfully serves as a resting place for Vienna Township’s deceased for over 130 years including some noteworthy individuals local to Trumbull County and its history.

Faithfully serving as a resting place for Vienna Township's dead for over 130 years, the original cemetery, or what is now known as the "Old Section", was closed to any new interments in 1938 with the addition of "Section 1" to the north. Giving the cemetery an additional 216 plots for use, it is this tract that is still in public use. In this article, we will be looking at the Old Section. To easily find the graves featured in this presentation, markers are listed in order of appearance as one walks through the cemetery, starting at the front gate, as well as photographs for easy identification.

Mary “Polly” Bartholomew: Portrait of the Past 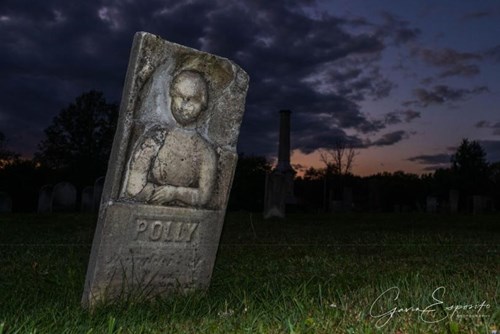 Polly Prescott was born in 1849 to Eli and Minerva Bartholomew as the third out of seven children. Her great-grandfather was Abiel Bartholomew, a former native of Waterbury, Connecticut and the first person to be buried in what is now the Vienna Memorial Cemetery. Sadly, details on Polly’s life are scarce since she passed away at the age of 11 during an epidemic of “putrid sore throat” in late 1860. Greatly mourned by her dear parents they had a headstone made of her likeness by an unknown hallmark carver; featuring a rare bas-relief portrait made of their daughter set in the marker. To this day, Polly lives on in the form of limestone viewing those who pass by their grave with an air of childlike curiosity. 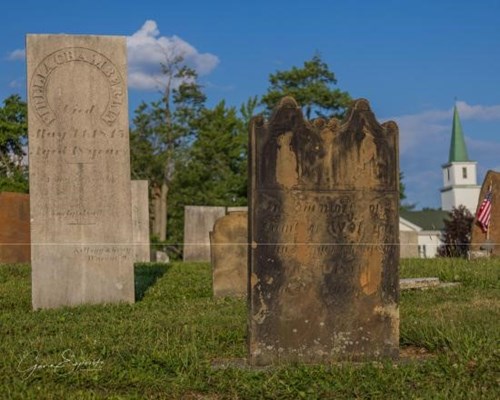 From roughly 1812 until 1835, Trumbull County, Ohio was home to a unique industry: clockmaking. During this 23-year period, over 75,000 tall cased wooden wheeled clocks were manufactured in Vienna and other nearby townships. Among this area's clockmakers was Lambert W. Lewis who settled in Vienna in 1806 going on to erect a three-and-a-half-story factory for this purpose.

It would go on to become the longest-running clock factory in Trumbull County; exclusively focused on the production of 30-hour tall case clocks. Lewis would pass away on August 16th, 1834, at the age of 48 years after what was described as a “very short and painful illness”. He was interred at the Vienna Cemetery under a double brownstone marker featuring two weeping willows for each side, plus doves perched atop them—a motif rarely seen in gravestone iconography.

Nathan Bailey Derrow was born in New London, Connecticut on August 16th, 1773. In 1807, Derrow left New York and came to Vienna Township, founding churches in other communities. Returning to Vienna a year later in 1808, just three years later in 1811, he was installed as the first permanent pastor of the Vienna Presbyterian Church, succeeding the itinerant Rev. Thomas Robbins who had established the congregation and returned to Connecticut that year. A few years later in 1816, the Connecticut Missionary Society offered Derrow an appointment out west in the Indiana Territory.

Traveling to Fort Harrison north of Terre Haute, Indiana he was met by a growing population served by eager but illiterate preachers. He traveled on foot and would read books to the local population when books were available. He organized two churches along the Wabash River, the first one in 1817 and the second one in 1818. He would then resume his tenure as pastor of the Vienna Presbyterian Church from 1825 until his death in 1828 at the age of 55. Buried next to his first wife, Betsey, his grave is topped with a brownstone marker adorned by the carvings of two weeping willows and an urn that over the years has sadly become badly worn. 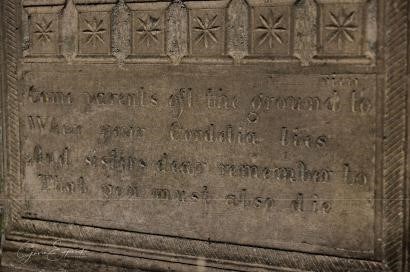 The tombstone of Cordelia Baldwin is a sight to behold. The firstborn daughter of Decius and Arathusa Hurlbert Baldwin, formerly of Simsbury, Connecticut she died on January 25th, 1841 at only five years old. Although her headstone is one fit for a queen the identity of the carver is unknown. He was given the name “Fancy D” for his fanciful swooping D’s that were used on words. Choosing to carve in sandstone and sometimes dabbling in limestone, D favored naturalistic motifs such as broad oak leaves, vines, flowers, acorns, and the ever-so-popular willow coupled with an urn.

In addition to these, he also included geometric embellishments such as fans, diamonds, and his most recognized icon; a six-sided coffin laid horizontally somewhere on the stone. With markers found throughout several counties in New York, Ohio and Pennsylvania between 1822 and 1842. Although Fancy D's identity remains anonymous and will likely remain so for years to come, his contribution to the countless cemeteries in the area remains noted, including over the grave of little Cordelia Baldwin.