The Kinsman Presbyterian Cemetery, also known as the "old cemetery" is one of the oldest cemeteries in Trumbull County, selected by John Kinsman, the man behind the town's namesake, and was first used in 1804. 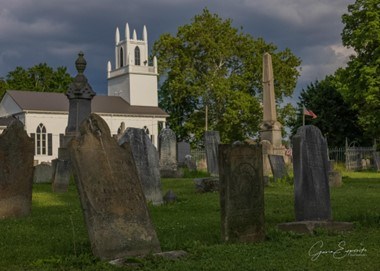 One of the oldest cemeteries in Trumbull County, the Kinsman Presbyterian Cemetery got its start in April of 1804 when John Kinsman, the township’s namesake selected this spot as the resting place for John Tidd, a bachelor from Easton, Northampton County, Pennsylvania who became sick with fever and died––becoming the first death in the township. Although he was buried in an unmarked grave, the cemetery began to fill up with headstones fast as more and more settlers from the East arrived, and the trials of pioneer life often proved fatal.

Later in 1833, the cemetery gained its most notable feature when directly to the east, the Congregational-Presbyterian Church was built by master builder Willis Smith. The church was built in the Greek Revival style with some Gothic influence and would be completed after two years of construction. To easily find the graves featured in this presentation, markers are listed in order of appearance as one walks through the cemetery, starting at the southwest corner of the yard, as well as photographs for easy identification.

John Kinsman: The Origin Of A Township Name 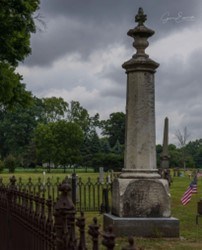 John Kinsman was born on May 7th, 1753, as the first of four children to Jeremiah and Sarah (Thomas) Kinsman of Lisbon, Connecticut. When independence was declared in 1776, John, then 23, enlisted into the service as an ensign in Col. Huntington’s Regiment of the 17th Connecticut Continental serving under Gen. Washington, and later participated in the Battle of Long Island on August 27th, 1776. Following the war, he would go back to Connecticut and establish a hattery going on to marry Rebecca Perkins, a fellow native of Lisbon in 1792. Then in 1798 Kinsman bought an interest in his Land Company and drew from a lottery Town Seven, Range One in the northeastern corner of what is now Trumbull County.

It wouldn’t be until 1799 that Kinsman purchased his holdings, paying $12.903.23 for 16,664 acres, but by the new millennium, the township had been surveyed, and with the formation of Trumbull County on July 10th, 1800, he was appointed as a justice of the peace by the territorial governor. After making Ohio his home, John frequently made trips back east to procure supplies for the burgeoning community of Kinsman and to encourage settlement, as well as contribute to its development by deeding land for a cemetery and academy. Also, an active participant in Trumbull County’s growth, in 1812, upon the formation of the Western Reserve Bank by Simon Perkins, he was among one of the nine men who incorporated it. On August 19th, 1813, after a full, industrious life, John Kinsman died in the township that carried his name at the age of 60 years. Interred at the family plot, he rests beneath a marble obelisk set atop a square base surrounded by a Victorian Gothic wrought iron fence alongside his wife and children.

Lydia and Nabby: The Two Wives of Jehiel Meachem 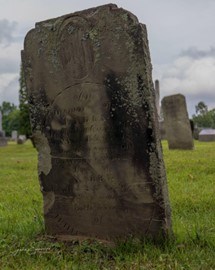 Entering this world on August 31st, 1763, as the first of three children born to Capt. Joel Meachem and Priscilla Simmons of Enfield, Connecticut, Jehiel Meachem’s lot in life was a blacksmith. A trade that ultimately called the Meachem family westward to Ohio, in 1805 when Jehiel was asked to come to Gustavus Township with the promise of 50 acres of land in exchange for serving as the village blacksmith. That winter, Jehiel and his family departed Connecticut for the Western Reserve, but in late February 1806, tragedy struck while stopped at Canandaigua, as when getting off the sled, Lydia tripped and fell; severely injuring herself.

Jehiel remained back in New York with his injured wife and two youngest children, Patty and Horathio. Unfortunately, their mother’s condition never improved, and on February 23rd, she passed away from her injuries and was Laid to rest in an unmarked grave at Canandaigua’s Pioneer Cemetery. Jehiel then proceeded onto Ohio arriving at Gustavus as springtime blossomed into view. In 1807 following his arrival in Gustavus, he would marry a second time to Lucy Abigail Hutchins. Sadly, just as his first wife did in 1806, Nabby too would pass away in 1828, leaving Jehiel a widower. Resting beneath a brownstone marker outfitted with a single weeping willow, Nabby’s headstone wasn’t only erected in memory of her, but Lydia also, whose remains rest back in New York state––a touching tribute to the two wives of Jehiel Meachem.

A Kind Angel: The Unique Headstone of Jane Treat 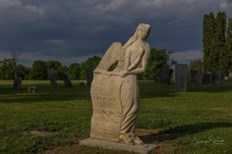 The daughter of Pennsylvanian emigrants who came to Ohio in 1804, Jane Scott was born in Kinsman in 1829, and at the time of her marriage, she was 21 years old. Her groom-to-be, Benjamin Franklin Treat, was only 17 and had come to Ohio from Bethel, New York. Shortly after their marriage at the age of 18, Benjamin opened a dentistry practice in his uncle's town of Colebrook on the square. Then on February 8th, 1852, not even two whole years into their marriage, Jane passed away at the age of 23. Buried in the Presbyterian Cemetery, her grave was topped by the statue of an angel, delicately carved from marble.

After Janes's passing, Benjamin moved to Colebrook, and on April 2nd, 1856, marrying a second time, then relocated again to Pontatic, Michigan in 1859, where he resumed his dentistry practice. Then upon the outbreak of the Civil War, enlisted into the 1st Michigan Cavalry, mustering out as a second lieutenant in April 1865. Remarrying a third time in 1875 Benjamin became interested in photography and moved to Coopersville, Michigan where he opened a studio, producing “photographs in fine style”. Passing away in 1899 at the age of 65, he is buried at the Coopersville–Piketon Cemetery in Michigan next to his third wife while back in Kinsman, his first wife, Jane sleeps in the Presbyterian Churchyard; her grave guarded by a kind, marble angel.